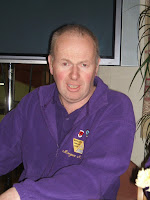 It has taken until the last game of the expanded round robin for Morgan to lose his first Aberlady game of the season.  This takes away his 100% winning record in the Trophy Competition.
However with 5 wins from 6 games he can no longer be caught therefore He along with Dale Callender, Pam Clark and Rosie Clark are our WINNERS.
This marks a comeback and his name will again appear on the trophy, just below son Sandy's from last season.
Elsewhere in the table, the only game remaining is John Good v Sandy Nicoll.  Although Sandy cannot be denied second place , John can avoid the wooden spoon.  To leapfrog Mike he must not only beat Sandy in his final game but in doing so must either win 6 ends OR win 5 ends and beat Sandy by 17 shots !
Realistically,  Mike will be looking to Santa if he requires additional wooden cooking equipment.
Posted by Graeme at 12:53