After a delay of 7 years, we were finally able to run our Friendship Kettle Competition.

The competition was originally run in November 2010 to celebrate our 150th anniversary.  It was intended to be run on a 5 yearly basis but was postponed in 2015 due to a clash with the Indoor Grand Match.  It was again postponed last year when it clashed with a Murrayfield 'Rugby Day' meaning that our guests would have no access to car parking.  This year, things finally fell into place, with the exception of the trophy having gone AWOL.
The clubs that share our 'birthday' were again invited and 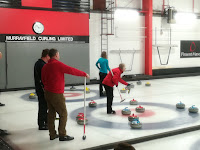 we were delighted when Leswalt, Blairdrummond and Kenmore/Breadalbane accepted our invitation. Unfortunately Portpatrick and Belmaduthy were unable to raise teams this year, but East Lothian Province and Haddington 'Juniors' kindly stepped up to complete our draw.
The teams were greeted by President, Graeme.  The rules explained (much simpler than his Christmas Bonspiel rules, thankfully) and the teams sent out to play. 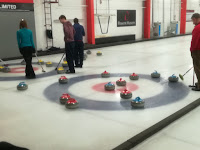 Each of the visiting teams were paired with a 'home' team for the first round and some close games ensued (which made the second round draw extremely difficult).
The first games saw our Aberlady Team of John Good, Morgan Nicoll, Sandy Nicoll and Pam Clark take a narrow 1 shot lead over Leswalt and therefore facing off against each other in the second round.  The other 4 teams were all snapping at their heels. 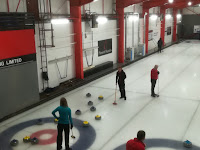 The second round saw a lot of thinking going on, in all the games, with lots of stones in the heads and some fine curling going on all round.  Some could accuse Aberlady of not being very 'friendly' in their 'Friendship Kettle' administering a severe defeat on their opponents.  This resulted in a win for the 'Home' team and their opponents, Leswalt, tumbling from second to sixth place.  Meanwhile Haddington Juniors were capitalising on their late comeback in the first game, to control their second game, against Blairdrummond, from the outset.  They eventually came out of both games with a score of +2 which was enough to give them second place. 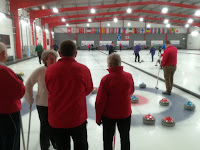 Kenmore/Breadalbane, with one win and one loss and a final score of 0 shots up, was enough to secure them a third place.
The games were followed by supper at the ice rink.
The President's observations on the day was that it was delightful to see so much 'chat' going on in a series of tight games.  The games were all played, very much in the spirit of friendship and it was especially nice to see so many 'younger' players on the ice, between Haddington Juniors and the double father/son rink put out by Blairdrummond.  This all bodes well for the future of our clubs and the sport in general.
Hopefully we will have found the trophy in time for our next anniversary  'Friendship Kettle' competition !