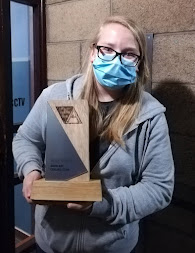 Six months late and  under the new 'THIS is the new normal' regime,

a confused bunch were shepherded onto the ice by the Covid Officer to settle last season's (but not last year's) President v Vice President.

Julia (for the President) was involved in a close tussle with Dale which resulted in a 6 - 4 victory for the Vice President.  Meanwhile John G (for the President)  was struggling against last season's (this year's) wooden spoon holder, Mike.  John eventually managed to pick up a three in the final end, to go down by 12 - 3. 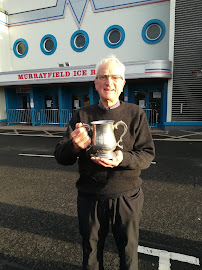 Overall, a win to Rosie Clark, The Vice President by a total of 18 - 7.  The President, Pam Clark, was absent from the game and has, so far, declined to return the trophy.

Meantime under cover in the car park and darkened doorways, Graeme presented various winners with their trophies, in a very clandestine way.

The first photo is John Good posing with the Pairs trophy which was eventually given to his partner Cathy Maclean.  The second is our new Gill Daley Achievement Trophy being received by Justyna Konowrocka, which was awarded to her jointly with Rosie Clark.