The Importance of Leads & Seconds

OR - the over-importance of skips. 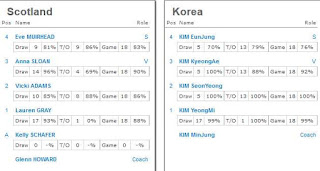 The recent game where Scotland's Ladies were beaten by the Korean team in the World Championships goes to show that without good lead and second stones a game can easily be lost.
The score was 8 - 6 to Korea but the stats show Eve outplayed her counterpart 83% to 76%, while the thirds were almost level.  The Korean lead however played at 99% and their second at 100%, compared to the Scottish team at 88 and 86%.
Basically the Leads and Seconds set up the end and are therefore essential to the teams results.  Even Eve couldn't do anything to prevent the loss as Scotland were always being forced to play catch up.

Never believe that anyone is just on the ice to make up the numbers, Leads and Seconds are critical to a game and often as important as the Thirds and Skips ! (whatever they may tell you)