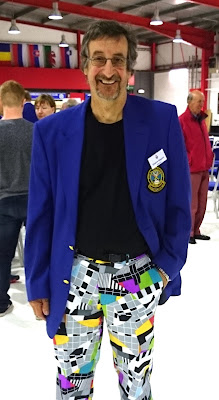 After a long delay, I am getting round to writing up the final game of the season.

President v Vice President
In the headline game Vice Pres Graeme took an early lead of 2 against President Sheena's rink (skipped by John Good)  What followed, while amusing, definitely did not go to any script.  Graeme has probably never made so many doubles (and treble) take outs in his life, unfortunately many of them were his own stones.  George his second was even scolded at one point for removing one of his own stones being told, 'that's our skips job'. Graeme's shots left both skips and thirds confounded by some of the outcomes.
Lest too much be made of this I have to say that Sheena's rink were also not immune from the 'odd' shot.
Amid the laughter the President's rink of John G, Morgan, Dave W, and Sheena were still being pegged to a one shot lead with one end to play.  Finally some luck went with the VP's team of Graeme, Josh, George and John S and they stole a three giving them a two shot win.

Meanwhile - on the other sheet:-
Mike W, playing for the President with Stan, Cathy and Pam were giving the youngsters, Sandy, Karen, Dale and Rosie a tight game with all ends except one going by a single shot.  With one end to play Mike was leading Sandy by one.  By the time the other other game was finished, Sandy only had the last stone of the game to play and was lying two down.  With a rowdy audience and Sheena & Graeme limbering up for 'Draw the Shot' Sandy (and Karen) kept his nerve(s) and played a take out through a port and lay for one, resulting in a peeled game.

The aggregate scores then record a two shot win for the Vice President.

The game was then followed by a swift little AGM and the serious business of a convivial supper.