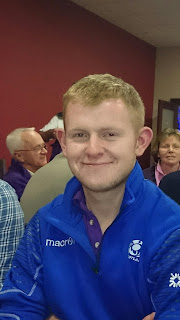 Last night saw the start of the Aberlady season, with the first round of the traditional knockout competition.  It produced two very different games.  Graeme struggled with his luck (and some may say skill) against John and he ended up on the end of a big defeat.  It must be added that John played very well and even tricky last stones facing three or more against him were excellently executed.
On the other sheet, New(ish) boy Sandy was in a scrap against Mike. This resulted in numerous requests by both skips to know what would happen in the event of a peeled game.  No sympathy was given from the and they were resolutely told that it would be a draw shot challenge.
With Sandy being up going onto the last end he declared that his tactics would be to 'hit everything' (no surprise there). This did not explain the wall of granite stopping both teams from drawing into the house.  Eventually one of the guards was popped up to just bite the front ring and a result was had.  Sandy took the game 6 shots to 4 and will play John Good in the final next week.
The evening was completed with a supper in the new look bar and everyone left satisfied that the new catering staff were up to scratch.
Posted by Graeme at 16:05