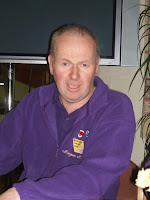 Congratulations to John Good's team, who in his absence, won the Knockout last night in a tight game that saw father pitted against son and mother against daughter..
John's rink, skipped by Morgan, ably assisted by Dave Wyllie, Sheena Munro and Josh Kellock took on the strong team of Sandy, Dale, Karen and Rosie in what appears to have been a tight game.  Any loose shot by Morgan's (John's) team was promptly taken out by Sandy and his squad.
Despite Sandy trying to argue for the second round in a row that the result should be on ends (which he won 4 ends to 3) the results show that Morgan was the victor with a score line of 7 shots to 6.

Congratulations again to the winners and the tight games in the competition would lead us to believe that it could be a tightly fought season.