Following a very rapid exit from the Haddington Pairs, John Good and Graeme Maguire headed over to join the other 6 players for the Aberlady Points Competition.  John elected to play while Graeme took a supervisory position to ensure that the competition ran smoothly (at least that was his excuse).

It was heartening that four out of the eight players were playing in our Points for the first time, one of them coming a creditable second !  The same could not be said for our two 'regular' skips who only managed fourth and fifth places. 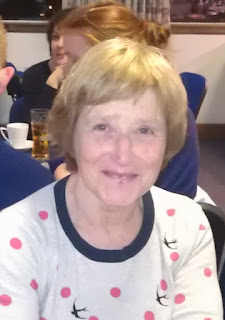 The overall event was low scoring this year which, I'm told, was down to some 'tricky' ice.  This is possibly contradicted by the winner improving their 'best ever' score (for the second year running) by a total of nine points and moving up from their best placing of fourth to record a truly impressive win.  Not only that, they were also the only player not to record a blank and only one of two players to record an eight !

So it is Congratulations to Pam Clark who wins her first Points Competition !

Honorable mention also goes to Ian Campbell, who although finishing sixth was in SECOND place after 5 exercises (one point behind John McOmish).