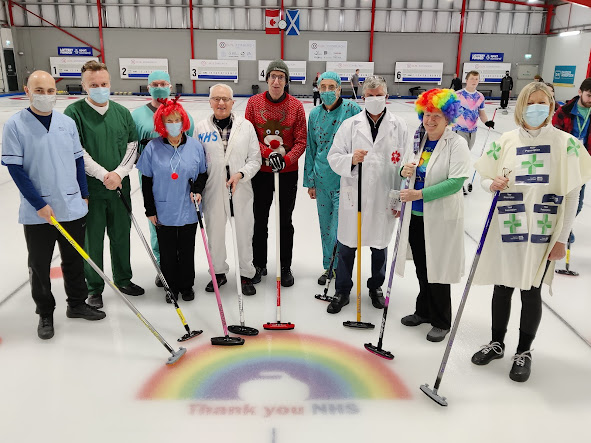 After emergency Covid Committee meetings the Christmas Bonspiel/Bombshell was held with diminished numbers.  Big thanks go out to David Wyllie who not only agreed to skip at very short notice but was then lumbered with only one teammate.  Big thanks also to Rachel MacRae who made her club debut at this much anticipated event - A daunting task ?

This years theme was the NHS and I can report that No-one was fined for the lack of 'fancy dress', although one player claiming that their outfit was as a hospital visitor was perhaps stretching it a bit! (As was the President's attempt at gluing 'prescription bags' onto her lab-coat)

The usual mayhem ensued while skips tried to interpret Graeme's rules.  It was perhaps alarming to find out that some of the regulars seemed to perform better with the delivery sticks and once again different skips took aggressive or passive interpretations to the rules.  Perhaps the most amusing 'new' event was the 'silent' curling with players trying to make their opposition laugh.  John Good became unstuck when he could not avoid an audible exclamation (Arthur Conan-Doyle would have said 'ejaculation there but I don't sink to those depths) after a good shot had been played.

Team Good let Team Wood have a four end head start before they started scoring, then mad something of a late recovery taking 3 out of the last 4 ends. Meanwhile, the Maguire and Wyllie squads were trading ends.  The final scores were the closest in recent Bombshell history with both cards showing 7 - 3 wins for the Wood and Maguire trios.  Graeme generously didn't disqualify the Wood Team for their incorrectly completed card and declared Mike Wood, Pam Clark and David MacKay as winners (They had failed to deduct 0.5 shots for the above mentioned John Good utterance).  The runners-up were Graeme Maguire Rosie Clark and Ian Campbell. 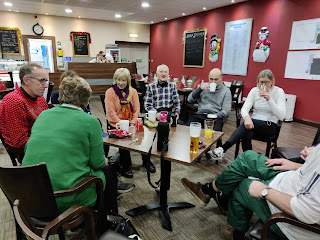 It is often said in events like this that there are no losers and that 'curling' was truly the winner, however with these rules, I'm not sure that would be fair. 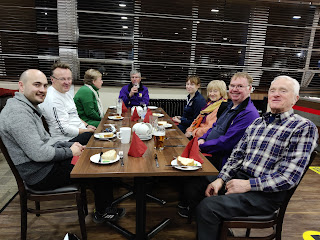 The afternoon was concluded with the usual enjoyable drinks and first club supper this season.