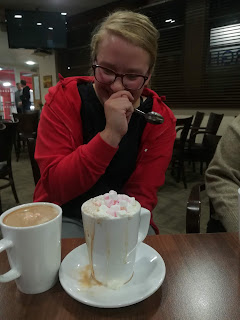 The Trophy Competition got off to a good start last night with two interesting games.
The first, a rematch of Monday's Knockout Final saw Julia getting her sweet revenge by beating the Callander Squad 6 - 4 (although they were all square after six ends!).
The other game saw Mike's three man squad, skipped by supersub Karen against the three man Team Maguire.  The tactical absence of Graeme's team from the Knockout left them fresh and enabled them to run our 6 - 3 winners.
The players then adjourned to the bar where 'someone' had a lot of marshmallows in their chocolate.