A small, but quality, turn out along with a non-playing referee, enabled us to complete 10 exercises this year.  The tenth is normally reserved for tiebreaks but due to having plenty of time we elected to play it.  This was possibly a mistake because it allowed our leader to 'clear off' while creating a three way tie for second place!  The subsequent Draw the Shot for second place was inconclusive with no players putting their stone in the house ! - At this point we decided to retire to the bar.
Sandy once again supplanted his father (who did not defend his title due to a 'long run' in the Yara!) as our points champion, while Karen took the ladies crown for the fourth consecutive year.  Karen was also the only player to secure an 8 in any exercise, thus proving that Karen is indeed 'striking'.
The extra end did enable a couple of players to rise up the 'all time' tables with Dave Wyllie beating his previous best by a whopping 72% and puts him in 5th in our 'since records began' table 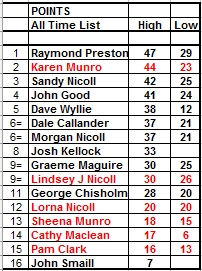