Once again the club dispensed with their usual tasteful purple outfits in favour
garments conforming to the theme of Europe for this years bonspiel.  Some interesting and unusual explanations for costumes were exchanged before everyone got down to trying to work out Graeme's Rules for this years extravaganza.
Two tight games were played out with Graeme's team of Sheena and Justyna powering through the first four ends before Team Dale (David and Pam) got their heads together and took the next three ends leaving them the Bonspiel Winners by 2 shots.  Meanwhile John and Mike battled hard to come away with a peel.
All the players were confused when asked to play to the 'half length' houses in ends four and five (The second time from opposite ends of the rink) and then resorting back to the 'normal' houses.  Seldom have I witnessed so many hogged stones !
An excellent turkey dinner was then provided by Paul and his caterers and a toast drunk to 'Absent Friends' as last years Bonspiel was the last time that George was with us. 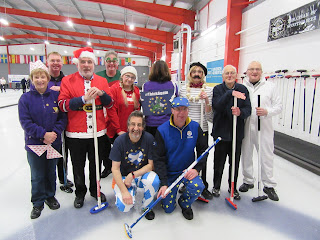