It was with great regret and sadness that I can confirm that George became ill on Christmas day and died, suddenly, the following day.  He was on his annual holiday to a small town in Egypt, with his wife Anne. 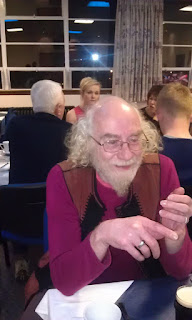 George has been a loyal member of Aberlady Curling Club for many years.  He originally joined us when the Civil Service Curling Club ceased.

George was definitely a larger than life character and was easily recognised on the ice with his trade mark striped tank top.  He was also a three time winner of The Musselburgh Medal including once when he missed all three games, which never ceased to amuse and embarrass  him.  His last game was the Christmas Bonspiel, for which he dispensed with his normal attire and instead went instead with the Bah Humbug hat (see posting below).

The funeral will be held at 2pm on on Monday 16th January 2017 at Inverness Crematorium.  Should any member wish to attend they should contact Graeme Maguire who will try to arrange a car share.

George was a one off and will be greatly missed.  Our thoughts are with his wife Anne