Nicolls - cashing it in 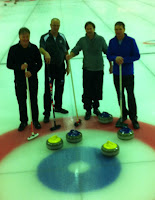 Aberlady Curling and the Nicoll family had a great start to 2014.

Commencing with an early start, Morgan and Dale battled their way through the competition to eventually run out the winners.  This is the first time Aberlady have won this competition and it is apt that Morgan should hold the trophy, which he donated to the Province three years ago.

After lunch Morgan was joined be a record 13 other members to contest the club Points Competition. 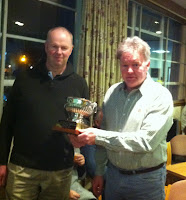 New member Raymond Preston was (literally) fast out of the hack and held a commanding lead after the first four exercises before his challenge wavered and Morgan started to recover from his mornings exertions. The full results can be seen on the 'results' page.  In this picture we see Dale, Morgan's partner from the morning handing over the brand new Points Trophy, which was generously donated by John Good.

To complete a great day for the Nicoll's, Lindsey took the Ladies title with an excellent score that saw her coming third in the overall points table,
Posted by Graeme at 12:58