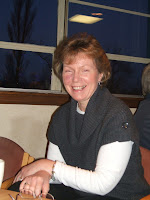 Congratulations to President Liz, supported by husband Morgan for defeating VP Dale and his trusty side-kick Mike in a comfortable 15 shots to 8 victory.  The result could best be called  a game of two halves.Liz, playing second and skipped by George played an exceptional game beating VP Dale 9 shots to something less than 1 shot.
On the other sheet, Mike battled to try and keep Dale's chances alive.  This he managed for a large part of the game, however Morgan rallied his troops and scored a three in the final end to reduce the gap leaving Mike the winner at to 8 shots to 6.
The game was followed by an enjoyable meal and the AGM.