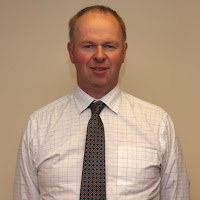 Congratulations to Morgan and his team of George, Sheena and Pauline who collect the first trophy of the season.
In a tight game against Graeme, Barbara, Sandy and the ever smiling Rosie they took the title 8 shots to 5.  The Fifth end was decisive with the score at 3 all Morgan was lieing with a well guarded 4.  Despite their best sweeping efforts Graeme's wide draw kept straight on the slow side of the sheet and only managed to cut the score down by 1 to 3 shots.  The final ends were traded with 2 shots a piece, leaving Morgan the deserved victor.
Posted by Graeme at 15:03